OPPORTUNITIES AND CHALLENGES IN THE FINANCIAL EDUCATION OF MEXICAN SOCIETY. BREAKFAST-SYMPOSIUM IN MEXICO CITY

OPPORTUNITIES AND CHALLENGES IN THE FINANCIAL EDUCATION OF MEXICAN SOCIETY. BREAKFAST-SYMPOSIUM IN MEXICO CITY 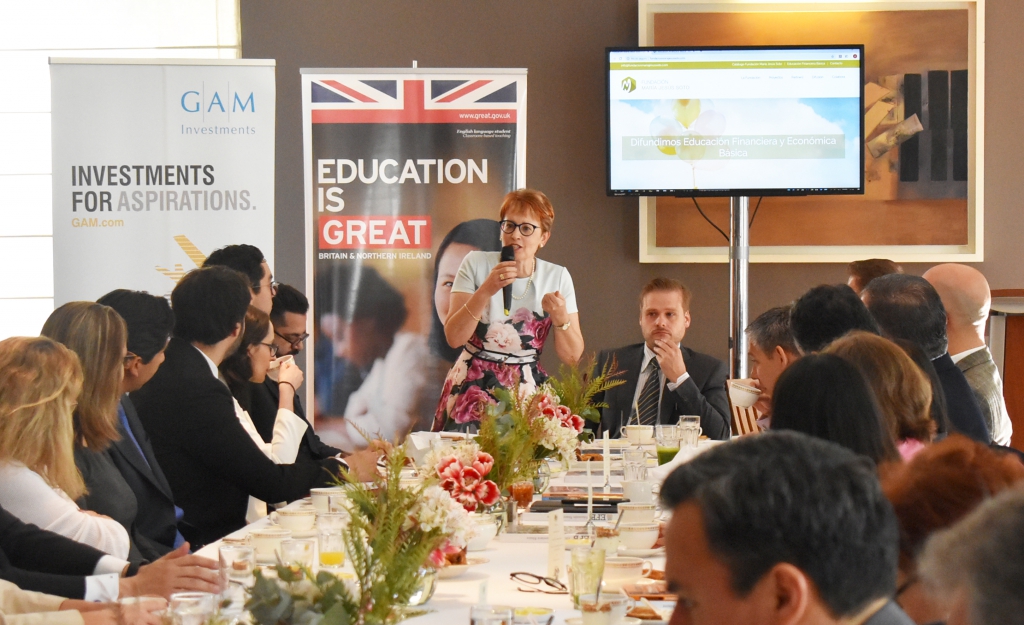 The DEPARTMENT OF INTERNATIONAL TRADE OF THE BRITISH EMBASSY in Mexico, together with GAM INVESTMENTS, CONSAR and AMAFORE organised the event that took place on 4 March at the residence of the British Ambassador in Mexico. A breakfast-symposium at which the founder of our foundation, Ms. María Jesús Soto, had the honour and pleasure of taking part. 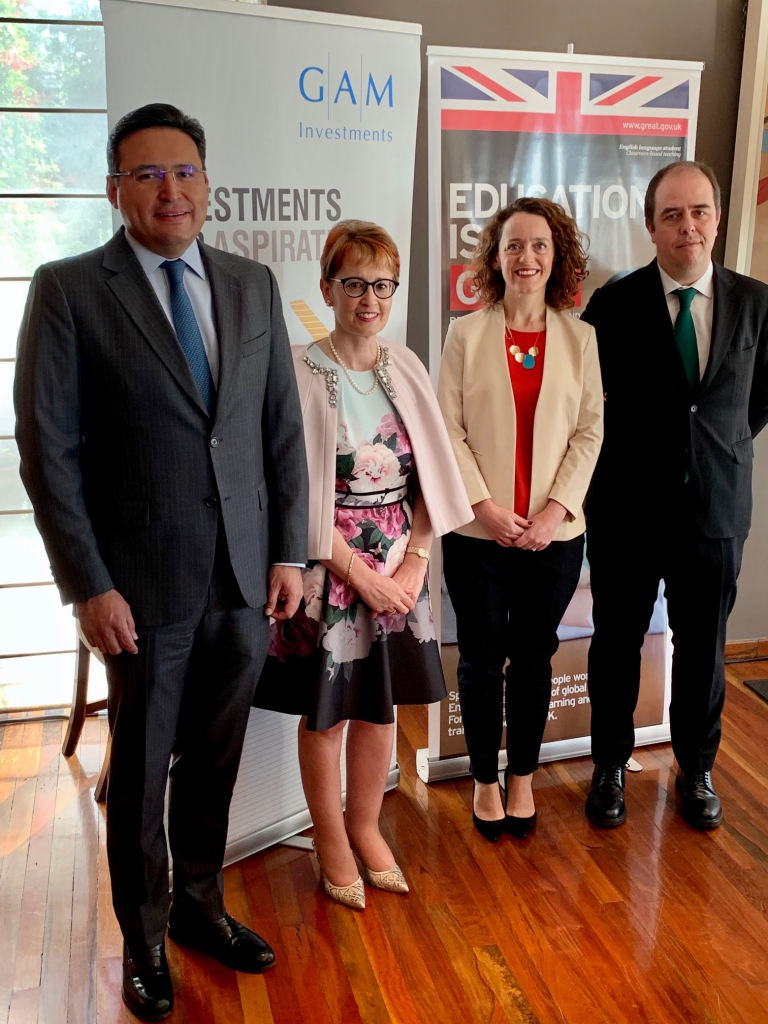 The event began with the words of Ms. Amy Clemitshaw, Deputy Ambassador, Deputy Chief of Mission of the British Embassy in Mexico, who set out her support for initiatives aimed at economic and financial education, highlighting the importance and the necessity of boosting education in these subjects, both in the UK and in other countries such as Mexico.

Mr. Bernardo González Rosas spoke on behalf of Amafore, the Mexican Association of Retirement Fund Administrators, a company founded in 1997 with a strong focus on helping to develop a quality financial culture for Mexicans.

Mr. Juan Ramón Caridad then spoke as Managing Director for Spain and Latin America at GAM Investments. He wanted to highlight the collaboration between his management company and the basic economic and financial education project of the María Jesús Soto Foundation. In addition to the company’s commercial activity, GAM Investments has for years supported social needs in this educational sphere in several countries as part of its corporate social responsibility actions, carrying out great work in this field.

The event was also attended by representatives of Mexican institutions such as CONSAR, likewise organiser of the event, which was represented by its director of special projects Ms. Rita Azahar Hamden; PENSIONISSSTE, the National Pension Fund for State Workers; CONDUSEF, the National Commission for the Protection and Defence of Users of Financial Services in Mexico; and MIDE, the Interactive Museum of Economics. Finally, Ms. Cristina Jiménez Savurido attended the event as president of the Spanish entity FIDE, the Foundation for Research on Law and Business. 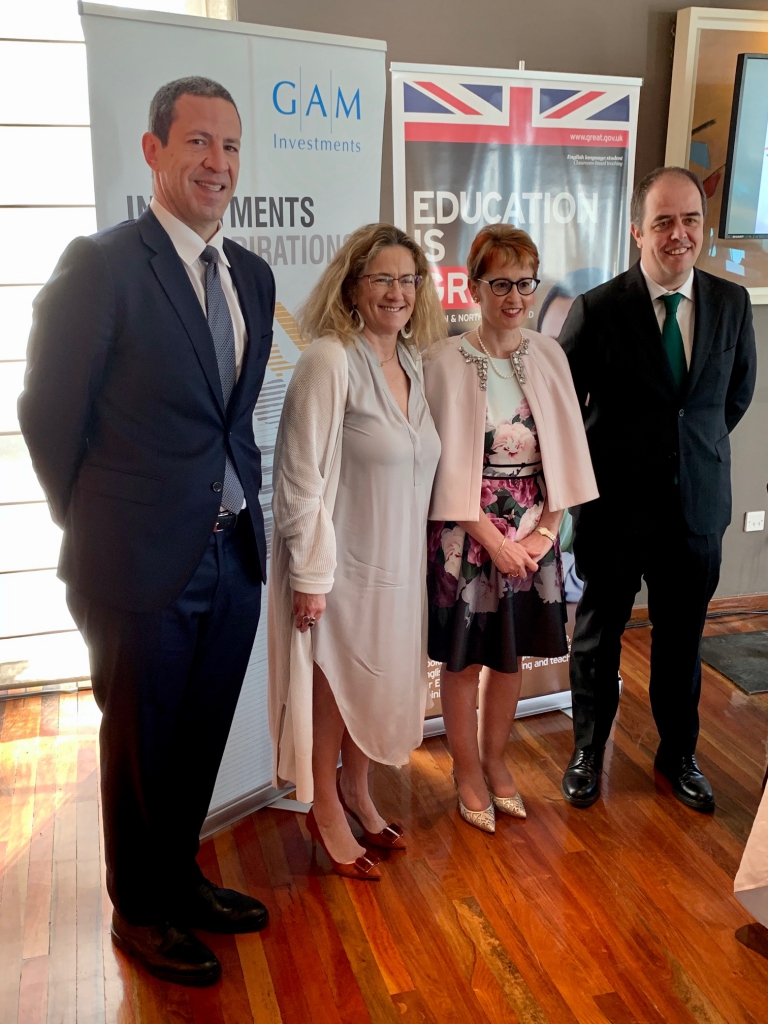 Ms. María Jesús Soto explained the global and international project of her foundation, supported by the guiding values of its work: independence, transparency, honesty and responsibility. Global, because the foundation’s materials cover economics as a whole, treating it as a science that is free of any ideology. International, because its materials have been translated into several languages ​​and because it collaborates with institutions, educational centres, organisations and companies in various countries.

During her talk, our president presented the content of two of her publications: My first book on economics, savings and investment and My first trip to the world of business and entrepreneurship, which, courtesy of GAM Investments, were handed out to attendees. She also spoke about the Basic Financial Education platform, a resource bank that can be found at the website www.educacionfinancierabasica.com, and which complements the publications with materials, many of them free, to continue the training via different subjects and at different levels, so that teachers from different disciplines can work across the areas of economics, finance, entrepreneurship and understanding the public sector.

The time for questions and comments by the attendees, which took place at the end of the event, was testament to the enormous interest and willingness of Mexican society to carry out initiatives that serve to improve the economic and financial education of citizens, with special emphasis on the most deprived parts of society, a very large group, as a way of improving their living conditions.

We at the María Jesús Soto Foundation wish to thank all the participants for attending this event, and especially its organisers and the Department of International Trade of the British Embassy ​​for so kindly providing us with the space to make this stimulating meeting possible.